I’d like to do a bit of digging on the whole ‘power suit’ concept. Where did that start? And more importantly, why?

I’m at an event in D.C. today and there are more than 1,000 people here. I’d guess 95% are men. And every one of them is in a power suit. The small cadre of women are dressed in their power ensembles too, which adds to my point.

1,000 people – all individuals, all from different parts of the country, from different companies, with different job titles – and you can’t tell them apart. When did dressing for success become dressing like everyone else?

Sure, there are variations. Some people have dark grey suits. The rare bird has a dark blue one. Some are sporting a tie with colors that venture beyond blue and white. Beyond that, though, there’s very little differentiation.

Is this just a DC thing? What’s a powersuit in California? Would you stand out because you’re in a button-down and everyone else is wearing a hoodie, jeans 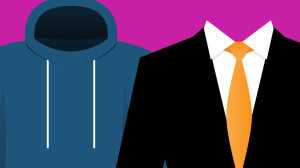 As more Millenials become the bulk of the workforce, will the powersuit still be a staple of the work wardrob? Or will it be considered on fleek? (Had to look that one up on Urban Dictionary!)

I don’t get it. We’re supposed to stand out from the crowd, right? To embrace our individuality. To show off that which makes us special. But here we are, lemmings (allbeit well-dressed ones).

Do you take people less seriously if they’re not in a suit? If they’re sporting bare arms does that make them less trustworthy somehow?

I’m sporting my short, spiky hair with pride today, knowing it’s one of the things that sets me apart. You could look across a sea of people in this place and find me just based on my hair.

Oh, and by the way, I like being at an event where women are so outnumbered – for the sheer fact that the line for the restroom was nearly non-existent. Those I had to wait with, though? You guessed it. All dressed in power suits.

Power to the people, I guess.