This weekend, I had the honor of attending the reception for friends who recently got married after 41 years together. FORTY. ONE. YEARS.

Why didn’t they get married sooner? 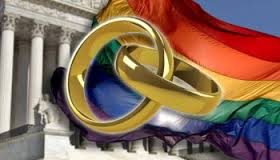 But their sexual preference is not what defines these two wonderful people. They’re both incredibly talented performers. They have hearts of gold. They are fun, funny, and downright NICE people. They just happen to be the same gender. And as a result, these two men who’ve been together nearly as long as I’ve been alive couldn’t legally be married until recently.

It’s really ironic to me. I know plenty of straight folks who can’t sustain a relationship longer than a few months. I also know some who were married and divorced in the span of three years. (Raising my own hand, here.) Hollywood marriages are infamous for their brevity; we laugh when we hear about those legal unions that last days or maybe months, and put bets on how long the next union will “stick.”

But those marriages are “okay” because they’re between a man and a woman, right?

Before I go any further, yes, of course I am familiar with the 2015 Supreme Court ruling that same-sex marriages are now legal. My point is, why in the hell did it take us so long to get to this point?

As I watched this pair happily, freely, and LEGALLY celebrate their union, surrounded by nearly 100 family and friends, it brought to mind the injustice they faced for four decades. And it reminded me of the injustices they — and countless others — still face in the form of discrimination, benefits denial, hate crimes, or even dirty looks and snide comments by people who just don’t get it.

I’m so very grateful to know this pair, and even more grateful they can now legally share their lives. And I hope that as a society we’ll continue on this path of recognizing people as  equal. We have a long way to go, but thank God for baby steps.

And congrats to the newlyweds!

8 thoughts on “It Took Them a Lifetime to Marry”