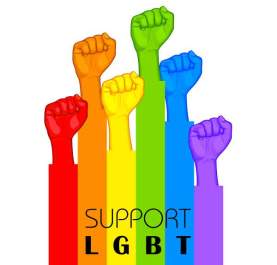 It’s been a week, folks. I’ve had highs and I’ve had lows. I’ve undergone surgery, celebrated Christmas, struggled just to get a shower, fought nausea (and lost), and mourned the loss of some of my generation’s biggest icons. I’ve thought alot about what I’d like to change for 2017.

And it’s only Wednesday.

I’ve thought about those facing discrimination for just trying to be who they are. Those who just want to use the restroom in peace. Those who want nothing more than to marry the love of their life. Those who want the same things we all want – love, self-worth, and acceptance.

It sounds so simple. And yet, it’s anything but for so, so many people. I’ve read so many stories (on a secret FaceBook page) about how difficult the holidays have been on the LGBT community. How a traditional holiday meal turned into a sermon. How some walked out on family – or didn’t even attend in the first place – because they knew the rhetoric awaiting them around the dinner table.

But I’ve also read about so many people standing up for themselves! Those who couldn’t wait to marry their significant other, and did so in the face of a government that threatens their right to do so within a few short weeks. Those who boldly put loved ones in their place – perhaps causing permanent damage to the relationship but determined to be true to themselves regardless.

Acceptance shouldn’t be seen as a gift. It shouldn’t have to be earned. It shouldn’t be dangled like a carrot that can be snatched away whenever the mood strikes. It should be something we all just take for granted, like the sun coming up in the morning or the changing of the seasons.

So that’s my wish for 2017.  I just wish people could learn to coexist peacefully – accepting each other for who we are, celebrating our differences, and honoring the beautiful soul inside each of us.

I’m going to spend the rest of this year – what’s left of it – thinking about how I can personally help make that happen.

This is bigger than me. It’s bigger than you. But if we all work towards it – a common goal – we can make progress. And that’s a wish worth working for.