That headline’s not mine but it sure caught my attention, so I  borrowed it. It belongs to FreedomTwoLove, a blog written by my friend, Rena Ingram, who founded that organization.

I try to bring fresh perspectives to this blog of mine that’s focused on learning about the LGBTQ+ community. Today, I’m excited to introduce you to Rena, an LGBT activist, blogger, motivational speaker, and all around great person to know! Read on to learn more about her and her wonderful organization that’s going to great lengths to reinforce the message of #NOH8.

FreedomTwoLove, A Light for All

FreedomTwoLove originated in February 2014 when it held its first event on the campus of Fort Valley State University under the #NOH8 umbrella as it was called, “#NOH8: Addressing the Misconceptions of the LGBTQ Community.” As the founder and current CEO, at the time I was a senior at the illustrious historically black college and university (HBCU) and was a little apprehensive about holding the event because I had never seen anything of the sort provided on the campus – a mark that specifically supported the LGBTQ+ community. Although I knew I had built the leverage to hold such an event by holding various leadership roles throughout my matriculation at the university, building strong relationships with others on the campus, and holding the title as Student Government Association’s Vice President at that time, it was still nerve wrecking to attempt something that had never been done. I began to develop the mindset that if I didn’t do it, no one else would, and it was just as important then as it is now that I stood as an advocate and created a safe space for others within my community – so I did, and it became a moment that would change my life forever.

In 2015, I returned to the university as an alumnus and held yet another 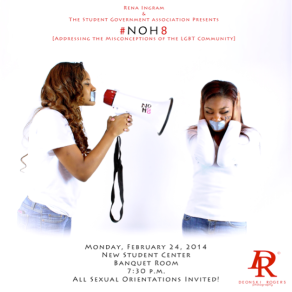 #NOH8 event which I rightfully deemed, “Part II.” The outpouring of support I received at that event pushed me to press play on my ideas and develop my own brand that branched away from the shadows of the #NOH8 movement – a decision that inspired the creation of what is now called, FreedomTwoLove. Freedom is defined as the power to act, speak, or think as one wants without hindrance or restraint, love is unconditionally self-explanatory, and “two” is used as a form of unique wordplay to be inclusive of both gay and lesbian love. This brand is different from every other LGBTQ-ally campaign because it strives to bridge the gap that currently alienates those of the LGBTQ community from their heterosexual peers by creating a safe and supportive space for dialogue through events and monthly blog postings for those of the community and others to generate open conversations about the negative biases and stereotypes that are present and evident in today’s society. Its overall mission is to serve as an aid in the fight against the injustices targeted on the LGBTQ+ community and encourage those within the community to build resilient confidence within themselves while simultaneously raising awareness of what’s going on within the community.

FreedomTwoLove is most popularly known for its blogs that are released on the 2nd of every month, such as, “I’m Pregnant … and I’m a Stud,” “The Fragility of Black Masculinity”, and “#ReclaimingMyTime: Don’t Let Your Story End.” By visiting www.freedomtwolove.com, you can not only keep up with the monthly blogs, but can also stay alert to what’s happening in the LGBTQ+ community with weekly news postings. In addition to being a 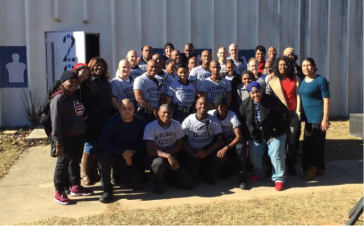 blogger for the brand, I am also a motivational speaker and certainly a LGBTQ+ advocate as I make my way through various communities in effort of helping my community receive better treatment in all facets of life. One moment in particular that I’m proud of consisted of helping train an academy class of police officers for the Atlanta Police Department with a segment called, “Transgender Interaction Scenarios” along with transgender women in the community to ensure that the new police officers will be respectful in body searches, pronoun usage, etc. once they got out into the field.

Ultimately, I understand that this is one of my life’s missions and I also know that the work has just begun. As long as I have air in my body, I’ll be the voice for others that can’t, won’t, or simply don’t know how; and when it’s all said and done, I can only hope that FreedomTwoLove was a light for all.